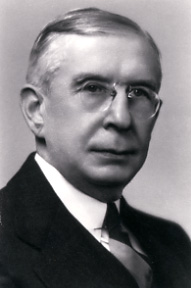 Gilbert Fairchild Close (1881) was born on 7th January, 1881 in Pittsford, New York, the son of John Edward Close (1848) and Mary Ellen Hooper. He entered Princeton University in 1899 and graduated with the Class of 1903. Subsequently he earned his Masters from Princeton in 1909.

From 1903 to 1906, Gilbert worked for the newly organized Princeton Alumni Weekly. Following five months with the First National Bank of Scranton, he returned to Princeton to work as Secretary to the President of the University, Woodrow Wilson, with whom he had taken classes as an undergraduate. After three and a half years as Secretary, he took the position of Editor of Official Publications and Assistant to the Secretary of Princeton University. In May 1917, he left that post to serve as Confidential Clerk and Assistant to the Secretary of the Navy. Gilbert served Wilson as Stenographer and Private Secretary to the President between August 1918 and February 1920. During this time, he was often by the President’s side, whether vacationing with him, or more significantly, accompanying him to the Paris Peace Conference. One of his duties at the conference was to type the first draft of the Treaty of Versailles. Following the Peace Conference, he joined the President on his tour of the United States to promote the treaty.

For the remainder of his career, Gilbert worked for the Commonwealth Steel Company, and its successor, General Steel Broad Castings. His titles with the company included Assistant to the President, Editor of The Commonwealther, Director of Personnel, and Director of Public Relations.

During World War I, Gilbert Fairchild Close (1881) held several positions in the government of President Woodrow Wilson, culminating with that of Stenographer and Private Secretary to the President. He died in 1952.