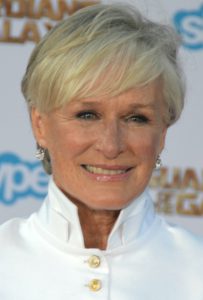 Glenn Close (1947) is an American actress. Throughout her long and varied career, she has been consistently acclaimed for her versatility and is widely regarded as one of the finest actresses of her generation. She has won three Emmy Awards, three Tony Awards and received six Academy Award nominations.

She began her professional stage career in 1974 in Love for Love, and was mostly a New York stage actress throughout the rest of the 1970s and early 1980s, appearing in both plays and musicals, including the Broadway productions of Barnum in 1980 and The Real Thing in 1983, for which she won the Tony Award for Best Actress in a Play.

In the 1990s, she won two more Tony Awards, for Death and the Maiden in 1992 and Sunset Boulevard in 1995, while she won her first Emmy Award for the 1995 TV film Serving in Silence: The Margarethe Cammermeyer Story.

She is a six-time Academy Award nominee, tying the record for being the actress with the most nominations never to have won (along with Deborah Kerr and Thelma Ritter). In addition, she has been nominated for four Tonys (three wins), fourteen Emmys (three wins), fourteen Golden Globes (two wins), two Drama Desk Awards (one win) and eight Screen Actors Guild Awards (one win). She has also won an Obie award and has been nominated for three Grammy Awards and a BAFTA.

And now for a bit of housekeeping

We publish everything we have in our fabulous trees, so basically if you can’t find it, we don’t have it. With over 18,000 people, 5,000 families, 11,000 sources, and 67,000 image references currently sat in our database, you’ll appreciate the amount of work that has gone into this over the years.

We know that everyone in the world is after your hard-earned cash, but if you do feel a donation coming on as a result of your visit here, then please feel free to send it our way. It all goes towards the upkeep of the site, for which we charge absolutely nothing. So, please help us to keep the site free to use. Thanks.

If you find anything that you think may be of interest to us, then drop us an email at stuff@closeancestry.com