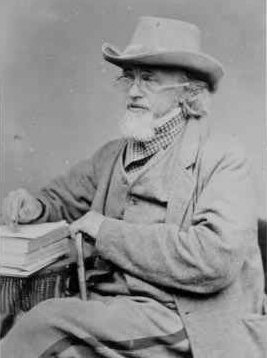 As a young man John helped his father Jarvis with his butchers business but he mistakenly thought he had a talent to be a poet. At the age of 16 he started printing fly-sheets of his verses to sell at the markets and later progressed to writing books.

In 1846 he established himself as a printer in Kirkby Stephen and called himself “Poet” Close and his house “Poet’s Hall”.

His prolific publications included his annual “Christmas Book”. In addition to his verses and stories these gave a revue of the year’s events in the district and therefore contain much biographical information on the inhabitants of the district as well as on his family and relations.

In 1858 he married Eliza Early, a young widow who already had three children and together they had another five of their own. During the summer months John lived at Bowness where he had a bookstall at the boat-landing stage on Lake Windermere.

The Closes and the Barkers were ardent Methodists, several of them being local preachers for many years, However John was always making disparaging remarks about Methodists while at the same time writing about “good old John Barker”. At one time his sister Ann, who was married to local preacher George Yare, wrote to him on behalf of their mother, asking him not to be so harsh on the Methodists.

He was in the habit of letting his pen run away with his discretion and so in 1859 was taken to court in Liverpool for libel for remarks he had made about a young lady of the Kirkby Stephen district. This resulted in £300 damages against him. He also had great difficulty making a living, however, he was in the habit of saying flattering things of those in authority and in high places.

In 1860, through the influence of Lord Lonsdale, Lord Carlisle and other gentlemen, he was granted a Civil List Pension by the Prime Minister Lord Palmerston. When it was discovered by Parliament that his writing had no merit the pension was stopped and he was given £100 from the Royal Bounty by Lord Palmerston in compensation. He continued to write of this “injustice” for the remainder of his life. See below for a copy of the Hansard transcript of 23rd July 1861, courtesy of Sharon Close.

Here’s a little sample of his doggerel:

Around the gods, each seated on a throne,
The poets, crowned like royal kings they sat.
Around their heads a dazzling halo shone,
No needs of mortal robes, or any hat.

See him in the trees

See him in the galleries

In the preface to Mr. CLOSE’s Christmas Book, which he has just sent us, we find a sketch of the LOWTHER Family, and how kind his Lordship and his son were to the Poet when last at Kirkby Stephen.  On their return to Lowther Castle, VISCOUNT LOWTHER sent Mr. CLOSE a box of game, containing 2 large hares and 2 fine pheasants.  On Tuesday, Dec. 16th, a hamper came by rail, with a large Stilton cheese inside, with a paper upon it, with these words, “From the Hon. Hugh LOWTHER;”  which kind present no little astonished and pleased Mr. and Mrs. CLOSE.

A READER OF THE HERALD.

Thanks to Stephen Nelson for the clip.

VISCOUNT PALMERSTON said, he was not at all, aware, that these pensions to which the hon. Member had referred, were granted to necessitous, members of wealthy families, who ought to look to their relatives for support. Some of these pensions were so small in amount that they could not be an object to any one moving in that sphere of life in which persons belonging to wealthy and aristocratic families would move; and, so far as he was concerned, the hon. Member’s observation could not apply to the mode in which he bad disposed of the pensions. As the hon. Member truly stated, the pensions allotted to persons of literary and scientific attainments were so small that it was almost a wonder how they could be of any great value to the receivers; but he could assure the House that the gratitude expressed by many very deserving persons for the assistance which those small pensions, varying from £50 to £100 a year, afforded, was exceedingly gratifying to him, as showing that in dispensing that amount which the law enabled him to dispense he was able to relieve a great deal of individual anxiety and privation. With respect to the particular case of Mr. Close, he thought that the hon. Member was mistaken in saying that the signatures to the memorial were in the same handwriting as the memorial itself, though undoubtedly the two first names—those of the Earl of Carlisle and Lord Lonsdale—were evidently not written by those noble Lords. So far as the Earl of Carlisle and Lord Lonsdale were concerned he found that the former had given his sanction to Mr. Close to use his name as a patron, although he had not authorized him to use it as supporting his application for a pension, while the latter noble Lord had done so. It was clear, therefore, that there had been no great amount of misrepresentation on the part of Mr. Close with reference to those two signatures. The reason, he might add, why he had taken away the pension from Mr. Close was that the hon. Gentleman opposite had communicated with him, and proved to him that Mr. Close had been convicted of having written a libel. Having ascertained that fact, it at once occurred to him that a man who was open to such a charge, whether he believed the libel to be justified or not, was not exactly the sort of person who was entitled to receive a pension from the Crown. Taking into account, however, the circumstance that some time had elapsed between the period of the announcement that the pension would be granted and its withdrawal, and it having been represented to him that Mr. Close had taken steps in expectation of receiving the pension which would entail on him considerable pecuniary loss, he certainly did not think it right—the fault resting, perhaps, in some measure with himself in not having examined sufficiently into the particular case—that Mr. Close should be allowed to suffer to so great an extent as he must have done if he had received no pecuniary assistance. The hon. Member, indeed, seemed to think that if he were disposed to render that assistance he ought to have paid the money out of his own pocket. [Mr. STIRLING: No, no!] That was the inference he drew from what had fallen from the hon. Gentleman; but, be that as it might, he had not felt called upon to adopt that course. He could, moreover, assure the hon. Gentleman that he paid great attention to the distribution of the grants in question; that he examined carefully the grounds on which recommendations for them were made; that the names of the persons making the recommendations were duly sent in to him, and that he had granted pensions to several upon whom— even according to the admission of the hon. Gentleman himself—they were properly bestowed. The hon. Gentleman had, indeed, stated that there were fourteen cases in which he had not been able to learn on what grounds grants had been made, and he, therefore, seemed to assume that in those cases the public money was not wisely and fairly distributed. He might, however, turn the tables on the hon. Gentleman, and say that his want of knowledge in these particular instances was no good reason why he should not be wrong, while his own acquaintance with the grounds on which those fourteen pensions were granted furnished no good reason why he should not have done right in conferring them. He could at all events assure the hon. Gentleman that he believed he could satisfy him that the claims in the fourteen cases to which he alluded were just ones, if he would only bring the circumstances of each case under his notice. In many instances, it was true, the recipients of pensions were persons not known to fame. They were not persons whose works had enabled them to arrive at that high degree of reputation and emolument which distinguished literary success secured. On the contrary, they walked in the humbler ranks of literature. They were men who struggled without avail to acquire wealth by the exercise of their talents, but who, nevertheless, possessed natural genius and great industry, and to whom the grant of the smallest allowance was a great boon, inasmuch as, however trifling it might be, it sometimes precluded the necessity of their being obliged to seek refuge in the workhouse, or to depend on the casual support of friends or relatives. Those grants had at all events, he believed, done great good. They resembled the distributions made by the Literary Fund, which were very small, but which, as everybody knew, had produced, in some instances, in cases of distinguished men, great relief in moments of distress. He had simply, in conclusion, to assure the hon. Gentleman that he should feel it to be his duty to take every precaution against the recurrence of such a case as that of Mr. Close.

Main Question put, and agreed to.

Thanks to Sharon Close for the transcript.