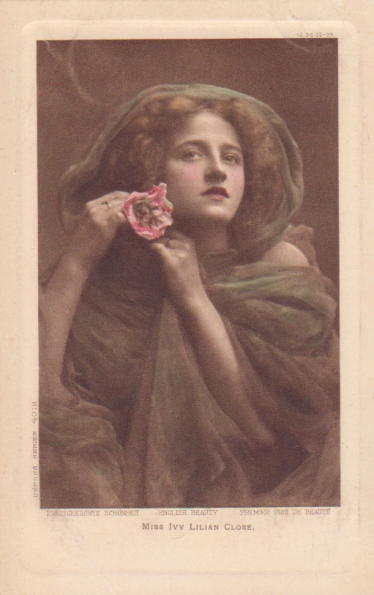 The actress Ivy Close was famous not as an actress in the first place, but as Miss Britain.

When the Daily Mirror launched the competition for The Most Beautiful Woman in the World in 1908, her father sent in photographs of Ivy. She was chosen and won the first prize.

After that she appeared on some British stages before she was spotted for the film in 1912 where she became one of the first British movie stars.

See her in the Close Ancestry trees

See her in the Close Ancestry galleries

She made her film debut in 1912 with Dream Paintings, and after that followed a number of movies:

and the German productions:

With Ivy Close also began a film dynasty which comprise four generations. Her son Derek Neame was a scriptwriter, her son Ronald Neame became a celebrated cinematographer and director. Her grandson Christopher Neame and her great-grandson Gareth Neame both became producers.